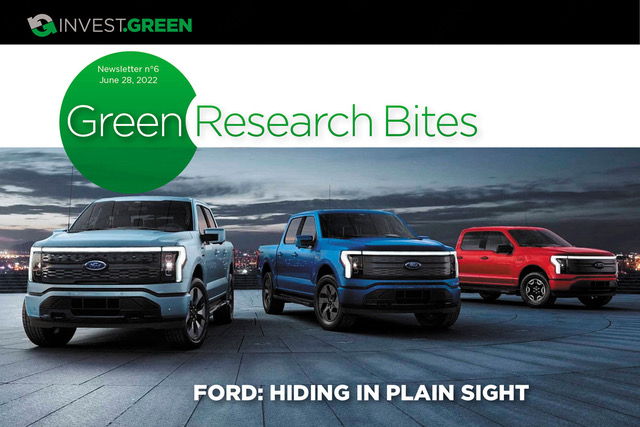 When people think about “ green” vehicles , the first name that almost automatically springs to mind these days is usually Tesla. Some might even think of Rivian, or maybe Lucid. But green investors should also think carefully about another green automaker that’s actually hiding in plain sight –Ford (F). At the end of the day, Ford will almost certainly have a larger positive environmental impact than all these other companies put together; incumbency does have its privileges !

The litany of Ford’s environmental initiatives and achievements is an extremely long one: since 2000, Ford has reduced the CO 2 emissions from its global manufacturing facilities by nearly 40%, including an impressive 11 % reduction last year alone. Over the same time period, it has reduced its energy use by 30%, and its water use by 43%, including a 21% reduction in 2021. Initially, it was the only U.S. automaker willing to work with the State of California to toughen their air quality standards (enduring some predictable verbal abuse from then-President Trump for its trouble).Today it’s the only full-line car manufacturer to commit to making carbon dioxide emissions reductions consistent with the Paris Climate Agreement. It has also committed to source 100% of its energy needs from local, renewable sources by 2035.

But the most important element of Ford’s environmental (and commercial) strategy is its all-in bet on electrification, which will see the investment of some $50 billion by 2026. By 2030, Ford expects that at least 50% of its sales will be coming from electric vehicles (EVs). In addition to developing and producing new vehicles, Ford is also investing heavily in the rest of the e-vehicles value chain: new battery R&D research, manufacturing, and recycling; charging infrastructure ( to the tune of 20,000 charging stations); autonomous vehicles ( in partnerships with both Lyft and WalMart ); and even EV consulting for third parties.

With all of that said, however, the absolute centrepiece of Ford’s gigantic EV bet is the creation of an all-electric version of the legendary F-150 pickup truck. The first of the new F-150 Lightnings were delivered in December of 2021. The F-150 is already an iconic vehicle: for 40 years in a row it has been the single largest-selling vehicle of any kind ! ( Full disclosure: the F-150 lost that leadership position for a single quarter in 2021, but it has since regained its title). Because of the F-150’s long time dominance, the emergence of a new, all-electric version promises to be a game-changer for the entire automotive industry, and perhaps even beyond.  In the early years, Ford expects to build and sell roughly 150,000 of them annually (for context, that’s about 20% of their current sales of the conventional version). Over time, Ford expects the electric version to out-sell its conventional predecessor. And not all of Ford’s EV eggs are in the F-150 truck basket; it has also begun production of the already popular Mustang Mach E as well.

Given both its environmental achievements and the huge competitive advantages conferred by Ford’s legacy manufacturing capabilities and dealership infrastructure (the company expects to have 2,300 EV-certified dealerships by 2030), green investors should definitely be paying attention to the evolving Ford story. Indeed, some already are: over the past year , Ford’s share price has increased by 50% , and its environmental performance and strategic positioning have been important drivers. 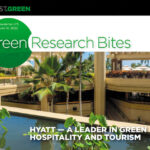 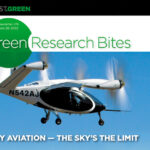 JOBY Aviation | The Sky’s the Limit